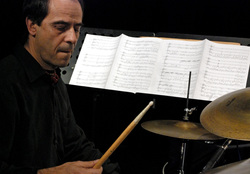 After belonging to different formations in its beginnings, founded Neobop in 1982, a group with which he won several awards and has toured almost all the Spanish geography.

Sir Charles activities as a sideman include work with jazzmen of special importance. Among them are James Moody, Jim Snidero, Mike Osborne, Gary Bartz, Jeff Gordon, Ron Jackson, Gene Shimosato, Pedro Iturralde, Doug Raney, and especially , the great organist Lou Bennett. Under his leadership has made numerous tours in Spain, several concerts in France and has accompanied the first row figures like Clifford Jordan, Frank Lacy, Pony Poindexter, Eric Barrett ... Considered by him as his musical godfather, was Bennett who was baptized with the pseudonym of "Sir Charles".

In June 1993 creates the rhythm section of the  'Whisky Jazz "in Madrid, with Fabio Miano and Richi Ferrer, under the name of "Milestones Trio”. During the ten years the group remained active, the list of artists who accompanied was remarkable and could include Jeanne Lee, Kirk McDonald, Eric Alexander, Valery Ponomarev, Ricky Ford ... In August 1999, is required by the theater group "Narea" to write  the music for ”El Último Sueño”, and in late 2000 appears in the movie “Atrapada En Un Blues”. From that year is part of the "BAC Trio”', with which he recorded a compact.

Since 2003 belongs to the famous traditional jazz group "The Missing Stompers" with which he recorded several CDs. and various television programs. Parallel runs include various groups  paying tribute to great jazz musicians like Oliver Nelson and Jimmy Heath. However, his”star” project since 2007 is called "De Aquí” in which the music is based on improvisations using the Spanish classical music from different eras.With this group has played in international Jazz Festivals like Tangiers,Madrid,Vigo,EUROJAZZ2010, Fundación Juan March, etc. 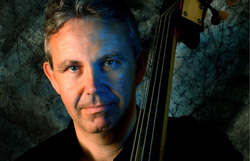 The Galician bassist Baldo Martínez is one of the most representative musicians of contemporary jazz made ​​in Spain, away from the currents of American Jazz  and very influenced by the current European jazz scene alterning his musical activity  between jazz and improvised free music. Among his most recent projects  deserves special attention the Proyecto Miño, one of the most daring  directed by Baldo Martinez.  A recently published  album of this project  has been considered by the French magazine Jazz Magazine "as the top 10 album of the month of January 2008,"also it was nominated for best jazz album in Music Award, and was Best album of 2008 in the journal jOURNAL OF JAZZ.

Founding member of  bands like Clunia or Zyklus, groups directed to explore new paths, in 1994 he created his own group, without neglecting his collaborations with musicians like Kenny Wheeler, Carlo Actis Dato, Maria Joao, Jorge Pardo Paolo Fresu and Joachim Kuhn. The latter presented in the Festival de Jazz de San Sebastián 2006 as "Iberia Trio" with special guest: the french clarinetist Louis Sclavis.

In 2006 along with Ramón López and Agustí Fernández  form the group TRIEZ. In its debut at the Jazz festival and Colors of Paris,  several  french critics  said: "From the first moment of action is clear the connection between the musicians and the "trialogue" becomes exciting. " 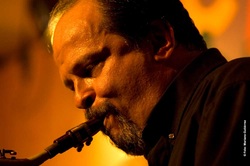 Born in Buenos Aires, Argentina. He studied piano and music theory at the Antiguo Conservatorio Beethoven, where he obtained a teaching certificate in 1979. At the age of 18, he began to play the baritone sax, showing a particular interest in the music of Serge Chaloff; inspired by John Coltrane, Albert Ayler and Ornette Coleman. He continued to learn tenor sax, then alto and finally soprano. While studying harmony and composition with tango composer Sebastian Piana, he self-taught trumpet, trombone, tuba, violin, clarinet and other Latin American folk instruments.

Since that time he has taught at several schools. In 1980 he taught music in both elementary and high schools, as well as at special education institutions. At the same time, he was hired as a saxophone and improvisation instructor at the Conservatorio Municipal Manuel de Falla (Buenos Aires).

In 1985 he met the guitar player Jorge Mancini, with whom he began to experiment in free improvisation and contemporary music; they were brought together by the sax player Mariana Potenza and the percussionist Victor Da Cunha, creating the Grupo de Improvisación Tercer Mundo (Third World improvisation Group). It was with this group that he recorded his first record as a soloist - Un Hilo de Luz (1987).

Although he had been playing the quena, the accordion and other ethnic and percussion instruments alongside the standard ones for several years, his interest in folk music was further developed in 1988 when he performed and recorded with the pianist and composer Eduardo Lagos (a great innovator in Argentine folklore).

He developed a truly personal view of improvised music when he formed his own quintet, with which he explored the deepest roots of Latin American music. Together with musicians such as Cesar Franov, Enrique Norris, Carlos Triolo, Diego Pojomovsky, and Guillermo Bazzola among others, he made his second recording “Escaleras de la Comprensión” (Melopea Records- 1990/91).

In Buenos Aires he recorded Milonga (Melopea Records- 1997) and debuted with his solo set show where he improvises freely on American folk tunes, interpreting bagualas, vidalas, bailecitos, chacareras and others in his own unique style.

In 2009 he recorded a CD with the GNU TRIO, receiving great reviews in the U.S. in www.Allaboutjazz.com magazine.

Last year he was invited by the Columbia University of New York for the inaugural concert at "GlickerMilstein Theatre", it was part of the "Thinking Music and Sound in Latin America and the Caribbean" conference and it was organized by the Center for Ethnomusicology and the Institute of Latin American Studies. In NYC, he performed with Lucia Pulido, Erik Friedlander, Luis Bonilla and group at the “Manhattan Simphony Space” and also he played with  JP Carletti at the "Downtown Music Gallery"  in Manhattan.